During the study, researchers measured 4,000 hours of wind turbine noise in order to calculate indoor and outdoor noise levels at different homes in the study. (Reuters) 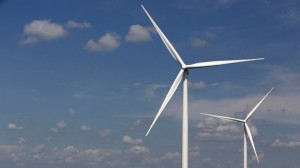 A Health Canada study has found no link between exposure to wind turbine noise and negative health effects in people.

Wind turbine noise did not have any measurable effect on illness and chronic disease, stress and sleep quality, Health Canada said.

However, the louder the wind turbine noise was, the more people reported being very or extremely annoyed, the department reported in a summary released today of the Wind Turbine Noise and Health Study.

The $2.1-million study, conducted with Statistics Canada in southern Ontario and Prince Edward Island, was launched in 2012. At that time, groups such as Wind Concerns Ontario had alleged that growing numbers of wind turbines were making people ill.

According to the Canadian Wind Energy Association, there are now enough wind turbines installed across the country to generate up to 8.5 gigawatts of energy, a 62-fold increase since 2000.

The study involved an adult in each of more 1,238 households at varying distances from wind turbines. The participants answered a questionnaire in person, and health measurements were taken, including blood pressure, heart rate, measures of sleep quality, and levels of the stress hormone cortisol in hair samples.

The researchers also measured 4,000 hours of wind turbine noise in order to calculate indoor and outdoor noise levels at different homes in the study.

No effects found on health

The study found no link between wind turbine noise and ill-effects including:

“While some people reported some of the health conditions above, their existence was not found to change in relation to exposure to wind turbine noise,” Health Canada said.

The study did find that as levels of wind turbine noise increased, people reported being more annoyed by various aspects of the turbines, from the noise itself and the aircraft warning lights on top of the turbines to the way they caused shadows to flicker.

Health Canada said the results of the study are considered preliminary until published in peer-reviewed scientific literature. It added that “detailed analysis and results will be shared with Canadians and the international scientific community over the next several months with updates provided on the Health Canada website.”

Health Canada said the results will be used with other scientific research to:

The principal investigator of the study was David Michaud of Health Canada’s health effects and assessment division. It also involved an expert committee that included more than two dozen government, academic and industry experts in fields ranging from acoustics to neurology and included four international advisers.