RICHARD BLACKWELL The Globe and Mail

Canada’s green energy sector has grown so quickly and has become such an important part of the economy that it now employs more people than the oil sands. 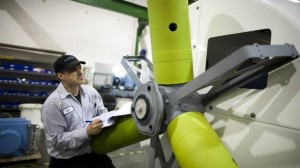 About $25-billion has been invested in Canada’s clean-energy sector in the past five years, and employment is up 37 per cent, according to a new report from climate think tank Clean Energy Canada to be released Tuesday. That means the 23,700 people who work in green energy organizations outnumber the 22,340 whose work relates to the oil sands, the report says.

Worldwide, 6.5 million people are employed in the clean-energy sector.

“Clean energy has moved from being a small niche or boutique industry to really big business in Canada,” said Merran Smith, director of Clean Energy Canada. The investment it has gleaned since 2009 is roughly the same as has been pumped into agriculture, fishing and forestry combined, she said. The industry will continue to show huge growth potential, beyond most other business sectors, she added.

While investment has boomed, the energy-generating capacity of wind, solar, run-of-river hydro and biomass plants has expanded by 93 per cent since 2009, the report says.

Clean Energy Canada says the industry’s growth has been accelerated by supportive policies in a handful of provinces. However, despite its increased importance to the national economy, clean energy is still not a priority in Ottawa, it says.

Government backing is crucial for this industry, Ms. Smith said, as it has been for our other strategic industries. “Every major industrial sector in Canada – from the aerospace industry to the oil sands – has gotten off the ground with support from the federal government. But in the clean-energy sector, the federal government is really missing in action.”

Not only does the oil industry still get more substantial subsidies, she said, it also eats up a good deal of the country’s diplomatic relations efforts – through the lobbying for the Keystone XL pipeline, for example.

The report acknowledges that Ottawa has set some groundwork for clean energy, by supporting clean-energy demonstration and research projects, cutting energy waste and discouraging the construction of conventional coal-power plants. But it says the federal government needs to do a lot more. Ottawa should create tax supports for renewable technologies, pump infrastructure money into new electrical transmission lines and clean-energy projects, and put a price on carbon, it says.

As for the provinces, Alberta and Saskatchewan in particular should follow Ontario, Quebec and British Columbia in getting into the renewable-energy game, Ms. Smith said. Still, the necessity for this shift is beginning to gain some traction, she said, noting that Alberta Finance Minister Robin Campbell said last week that the province has to “get off the oil train.”

That’s a view shared by Kent Brown, chief executive officer of BluEarth Renewables Inc., a company that focuses on clean energy from the heart of the oil patch in Calgary. This new sector is now “a huge piece of the economy,” Mr. Brown said. “It creates a lot of meaningful jobs.”

BluEarth, which runs a portfolio of hydro, solar and wind projects in British Columbia, Alberta, Ontario and Nova Scotia, has created 35 new jobs in the past four years. That’s a small contribution but one that is being duplicated by hundreds of other firms across the clean-tech sector.

Clean-power generation is also not a slave to commodity prices and the subsequent boom and bust cycle that regularly hits the oil and gas sector, said Mr. Brown, who initially worked in the oil patch but developed a “deep dissatisfaction” with the lack of sustainability of the petroleum sector. While Alberta will remain a key oil player, it can also be a “true leader” renewables, he said.

The Clean Energy Canada report notes that much of the investment for Canada’s clean-tech expansion currently comes outside the country. Of the five largest investors since 2009, just one, Manulife Financial Corp., is Canadian. Two Japanese companies are in that top-five list, along with two German banking groups.

“The fact that foreign investors are coming to Canada to invest in our clean energy, tells us that we have a fantastic resource,” Ms. Smith said. “We need Bay Street to wake up and recognize this is where the puck is going.”