April 15 in Ontario
News Release – Creating Cleaner Air in Ontario April 15, 2014
Ontario is now the first jurisdiction in North America to fully… eliminate coal as a source of electricity generation. The Thunder Bay Generating Station, Ontario’s last remaining coal-fired facility, has burned its last supply of coal. Operated by Ontario Power Generation, Thunder Bay Generating Station was the oldest coal-fired station in the province.  The plant is scheduled to be converted to burn advanced biomass, a renewable fuel source. The province has replaced coal generation with a mix of emission-free electricity sources like nuclear, waterpower, wind and solar, along with lower-emission electricity sources like natural gas and biomass. 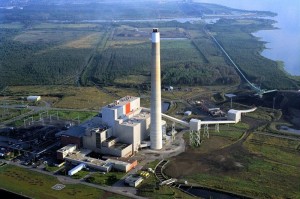 Ontario has fulfilled its commitment to end coal generation in advance of its target of the end of 2014. A coal-free electricity supply mix has led to a significant reduction in harmful emissions, as well as cleaner air and a healthier environment.
Providing clean, reliable and affordable power is part of the government’s economic plan that is creating jobs for today and tomorrow. The comprehensive plan and its six priorities focus on Ontario’s greatest strengths – its people and strategic partnerships.
QUICK FACTS
• Thunder Bay Generating Station came into service in 1963.
• Converting the station to advanced biomass will retain 60 jobs in Thunder Bay.
• Last year, Ontario introduced the Ending Coal for Cleaner Air Act, which would ensure coal-fired generation as a source of electricity in the province never happens again.
• Since 2003, Ontario’s coal closure plan has eliminated up to 30 megatonnes of emissions annually. The closure of Thunder Bay Generating Station marks the end of coal fired emissions from electricity generation in Ontario.
• According to a 2005 independent study, “Cost Benefit Analysis: Replacing Ontario’s Coal-Fired Electricity Generation,” the estimated cost of coal generation was approximately $4.4 billion annually when health, environmental, and financial costs were taken into consideration.
LEARN MORE • Learn more about the financial, environmental and health impacts of dirty coal.
• Learn more about how Ontario’s air quality is improving in the Air Quality in Ontario Report for 2011.

• Read the International Agency for Research on Cancer (IARC) study on outdoor air pollution as a leading environmental cause of cancer deaths.

QUOTES “Getting off coal is the single largest climate change initiative undertaken in North America and is equivalent to taking up to seven million cars off the road. Today we celebrate a cleaner future for our children and grandchildren while embracing the environmental benefits that our cleaner energy sources will bring.” — Bob Chiarelli, Minister of Energy